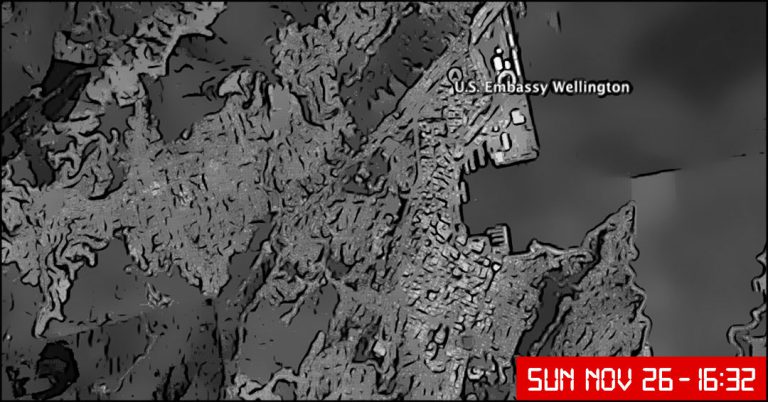 Here’s the article by Mark Mitchell, published just over an hour ago, at 9 am local time (it’s already Monday morning in New Zealand). Not very exciting, but it is thought-provoking:

“Yesterday afternoon, an attaché at the American embassy became ill. By early evening, seven of her colleagues had joined her at the Wellington Regional Hospital, but no one made the connection between these cases. It was only around midnight, when the ambassador and several other regular visitors to the embassy were also hospitalized, that suspicion was aroused. All of the patients were suffering from abdominal pains, fever, and diarrhea.

Tom Buckley, the head of the infectious diseases department, declared their condition was no cause for alarm, but said he never took cases of diarrhea accompanied by fever lightly. He evoked the possibility of food poisoning, since all of the patients had taken part in the Thanksgiving dinner held at the embassy on Thursday, a hypothesis contradicted in the case of one cleaning lady, also hospitalized, but not present during the meal. She only returned to the embassy the following morning to work her shift, and swears she ate nothing on site.

The first analyses have not identified the cause of the intoxication. Tom Buckley has placed all of the patients in rooms isolated from the rest of the hospital. As a precautionary measure, the embassy will be closed on Monday. Employees and visitors in recent days should consult a doctor as soon as possible.

This morning, Health Minister Georgia Penrose sought to reassure the public, playing down the risk of infection, although this cannot be excluded due to the case of the cleaning lady. ‘You know how it is,’ Ms. Penrose commented jokingly. ‘If the young woman pinched a piece of cake from the fridge, she wouldn’t be shouting it from the rooftops.’”